So here we go: my first FlickR “Explored”, reaching #474 on the first day after posting the picture.
It shows the entrance to the Royal Botanical Garden in Madrid. 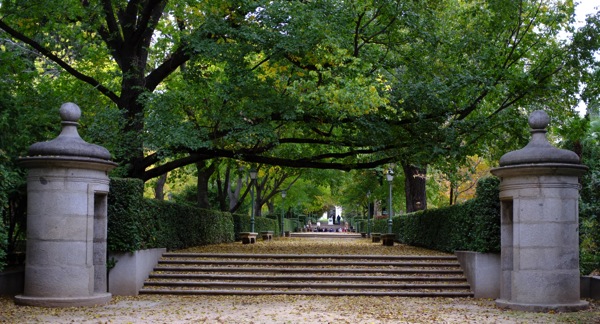 Interestingly, this is not the image with the most views, the most fav’s of the most comments in my stream. And I never considered it to be very “special” – neither in comparison to many other “explored” pictures, nor compared to some pics in my own FlickR stream. However, it reached about 60 views, 3 favs and 3 comments in a relatively short period of time, which seems to be the trigger for FlickR to “explore” an image. The subject and style is not very special (thus being interesting for a limited group), but is probably appealing to everyone: harmonic, peaceful, aesthetic, though a bit boring.
The photo in its explored version was only cropped to a slightly wider format (some boring pavement in front of the stairs were cut away) and ist otherwise OOC.