My current thoughts about the Fuji X100

When I read this article

from Eric Kim, I wrote the following comment about my experiences with the Fuji X100: 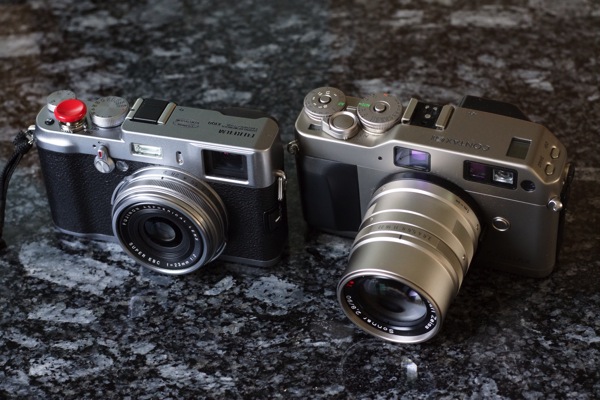 Did it improve my photography? Yes it did. A lot. Not because it is a better camera, but because it encourages me to use it in a different way. It challenges me and encourages me to work for each image. Saying “the camera makes great photos” is like saying “your oven prepares great meals”.

How is it to work with the X100? It is a Diva. Image quality is superb. Low light performance is amazing. Metering is amazing, too. Autofocus is a lottery. Sometimes fast, sometimes it just doesn’t quite want what you want. A Diva. At the beginning I also hated the UI and the buttons on the back of the camera, but meanwhile I notice that the functions are wisely distributed and rarely used. Besides formatting the SD card after downloading photos I rarely use the menu. The aperture, exposure and exposure compensation wheels are such a pleasure to touch and use. And the absence of a P/A/S/M mode dial or any scene modes is a further advantage. Just put the aperture and/or exposure wheel to “A” if you want the camera to take over. So nice and straightforward. The X100 is not and will never be my work horse, my all purpose best friend. It is like a Ferrari: somewhat limited in what it can do, and expensive. But brilliant at what it does, and such a pleasure to master.

//
Why do I think my photography improved? Flickr gave the answer. I have an album which contains the 20 “most interesting” photos from my collection. “Most interesting” refers to Flickr’s mysterious ranking of photos according to “interestingness”. The top 500 of each day are “Explored”. The “interestingness” is computed from number of hits, comments, people who favourited it etc.
I have a Flickr account since 2007, I believe, and I used several cameras sequentially and in parallel for the photos I uploaded. The Fuji X100 joined in only very recently, in July 2011. Nevertheless, currently (today and in the last few weeks) 17 to 19 photos in the “Most interesting” album are made with the Fuji X100. There may well be a bias because a lot of the are “street photography” pics, which is currently qute fashionable on Flickr, and many of my contacts are fond of street photography. But still, X100 shots seem to be much more attractive than photos (also recently taken pictures) made with my Lumix GH1 or  my iPhone 4.