I am a 55+ enthusiast photographer based near Bern, Switzerland. I shoot everything, but my main focus is on street photography and on graphical, simple subjects (mostly on instagram). 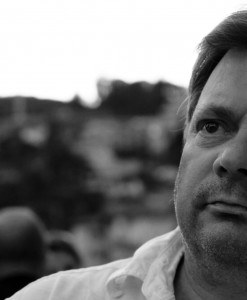 When I was younger, and when there were no digital cameras yet, I took my point-and-shoot camera on holiday or on events and shot the usual memories and “post card” subjects. About 15 years ago I began to carry a video camera around, and spent days in iMovie or Final Cut. It turned out to be a tedious, time consuming hobby, and nobody really looked at the resulting movies (…also because they were bad and boring).

The love for photography came up when I caught myself taking still images with my camcorder, and it became “worse” when mobile phones started to have cameras.

The photo bug really got me when I bought my Fuji X100 (see below).

I don’t use Photoshop (I don’t even have it), and I rarely shoot RAW. I try to get the shot right in the camera, and apply only moderate changes (mild cropping, b/w conversion, contrast and brightness adjustments). In most of the cases I import image files on my iPad and use iPad Apps for the image processing. Thanks to the iCloud photostream images end up in Aperture (for now, until Apple releases the Aperture successor) automatically.

RAW shooters may shake their heads, but I don’t care. I spend 30 hours each week in front of a computer, and I really don’t want to spend additional time to develop RAW files. And thanks to the amazingly good Fuji JPEG engine the image quality is top notch for 98% of the shots.

I have a serious G.A.S. infection that took me through several camera system changes. I started with a Samsung G10 (a Pentax-clone), then moved on to a Panasonic Lumix GH1. When the Fuji X100 appeared, I just had to get one, and I don’t regret it because the X100 changed everything for me. And I still have it, love it, use it. The X100 made me sell my MicroFourThirds System and buy a Sony NEX7. The NEX7 has quite some strong aspects, but ultimately a few things drove me mad: the lack of good lenses and the odd lens focal length selection that Sony offered for its E-Mount, and finally the somewhat computer-ish user interface. Lots of programmable manual controls, but with odd restrictions. Most controls do different things depending on the situation. Because the controls take user-defined functions, they don’t carry a label or symbol. And it is impossible to check current settings like shooting mode, ISO, aperture, shutter speed, focus mode etc. without actually switching the camera on and check on the LCD screen. Awkward menu system.

It was the increasing love of my X100 and the engaging way how it is operated and the also increasing annoyance with the somewhat detached NEX7 operation that made me sell my NEX system and buy a Fuji X-E1 with the 18-55mm lens. And what a difference it was! I also bought the 55-200 mm zoom lens (fantastic lens!), the 60 mm Macro lens and a Samyang 12mm f/2.0 super wide angle. The image quality of Fuji’s sensor and JPEG engine is simply amazing, and the lenses are excellent. Shooting with a Fuji is straightforward, engaging, simple and fun.

Recently I replaced the X-E1 by the X-T1, even though I don’t like the SLR-like housing with the central “prism” hump – I prefer the rangefinder style of Fuji’s other cameras much more. But the additional manual controls and the super EVF finder make the X-T1 the better camera. I’d love to see an X-Pro 2 from Fuji that inherits most of the X-T1 controls and improvements.

In addition to the two Fuji cameras I have a Contax G1 and a Sony RX100. I take the RX100 with me when I commute to work, and for mountain biking and skiing.